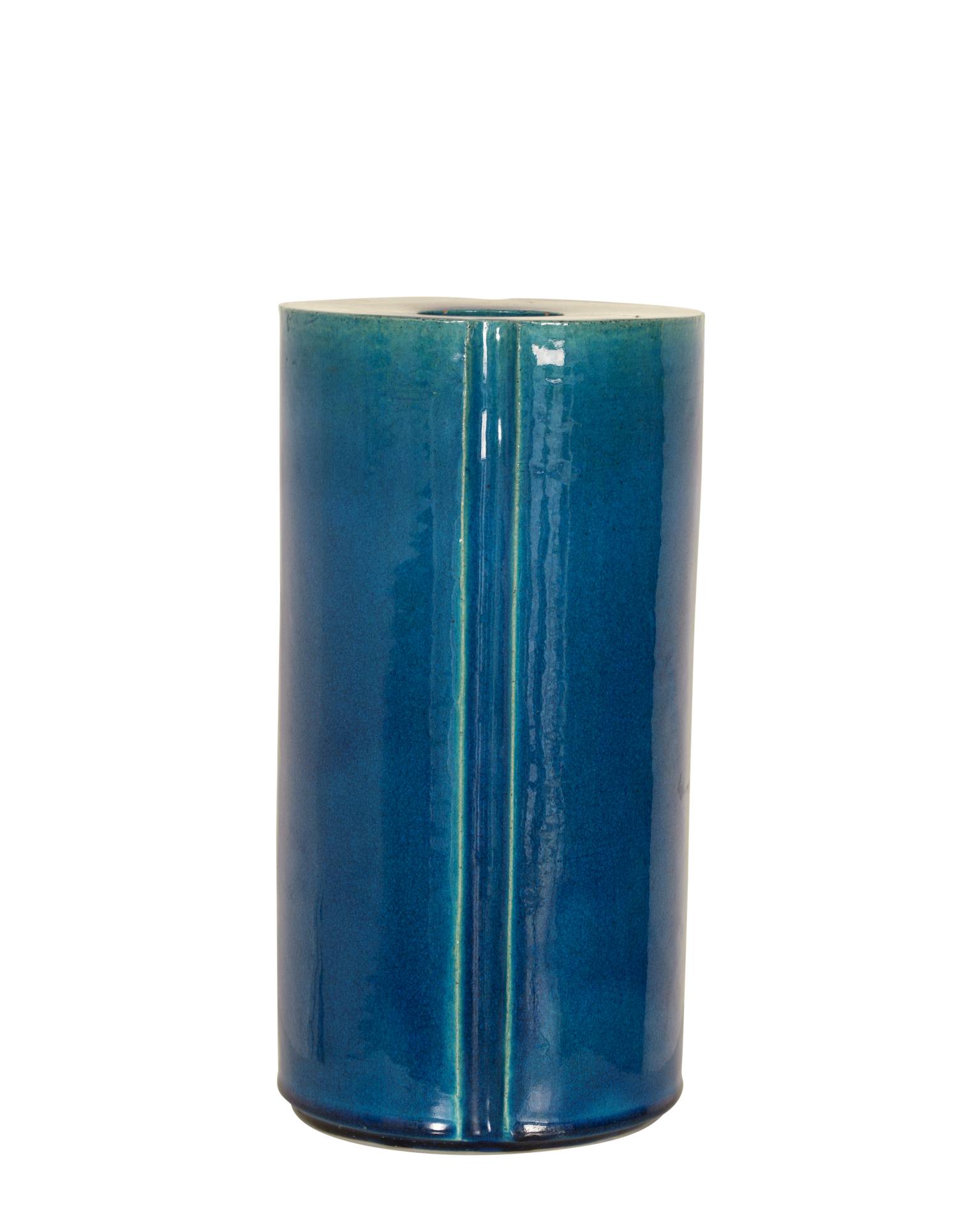 A cylindrical stoneware vase decorated with turquoise glaze. Signed AS

Manufactured and marked by Herman A. Kæhler 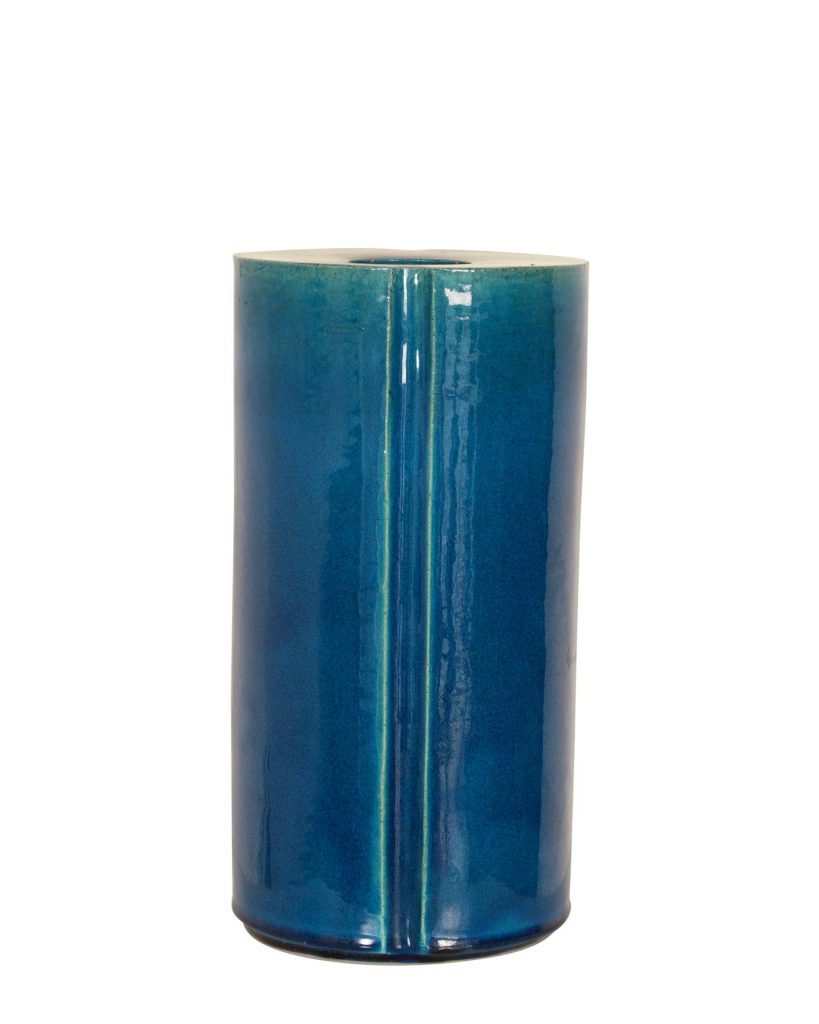 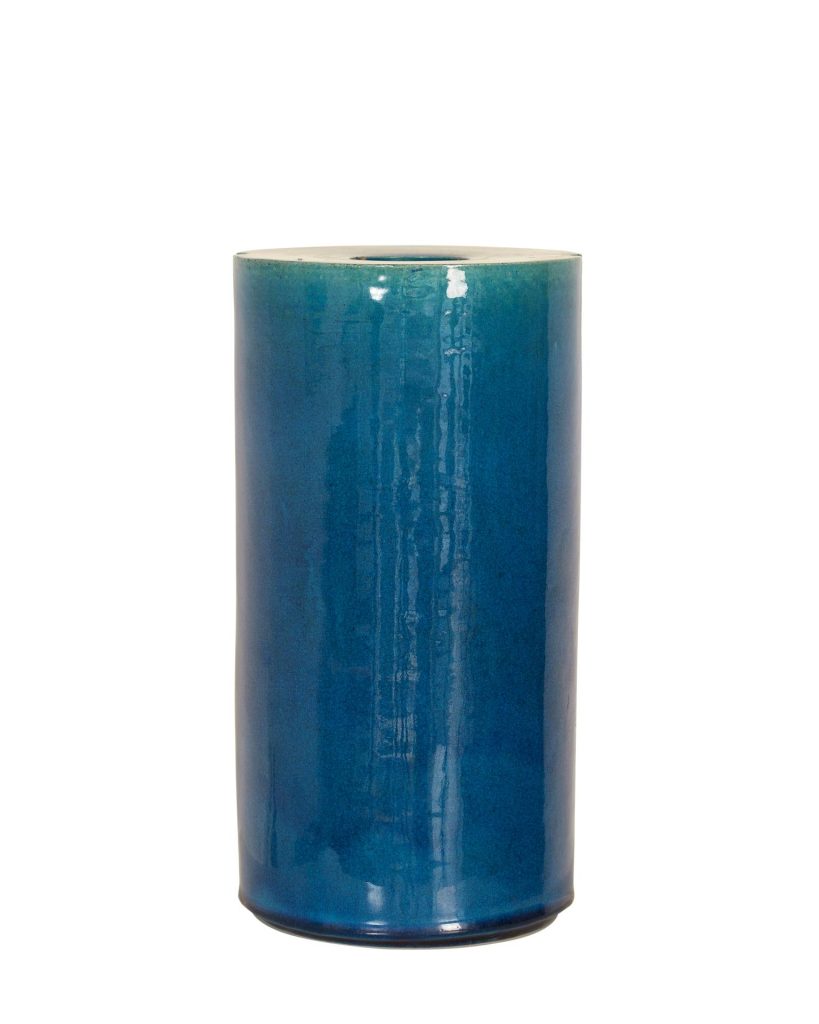 Allan Schmidt alternately used oil painting, collage and ceramic sculpture. He started as a naturalist with figure paintings and landscapes, but in the years after World War II he came into contact with the French and Danish artists who worked with the concrete painting. In the late 1940s, he left the recognizable motifs and began working on constructive compositions. To make the images dynamic, he often used lines, consisting of three or four strong black lines next to each other, which go diagonally across the image, cracking and forming a new figure. At the same time, he began to make tight sculptures, either flimsy iron structures or cubic cement blocks that shift and together form a whole. In the mid-1950s, the images, often in tall, narrow formats, came to appear cubist due to overlapping plans. The colors became dark, saturated blue and green, warm red and orange. In the late 1950s, the shapes became freer, more round, and gathered around a vertical center axis or around the center of the image, from which they are wound toward the edge of the frame. Around 1960, he began working with color opposites, often triad, but also modulations over a single color, such as. I cried. The four large wall panels in the West Theater in Brabrand were among the tasks that show the possibilities of concrete art in decoration, but when S. was commissioned for the large relief for Horsens Central Library, he chose a new material, stoneware. He had not previously worked with ceramics, but initiated a collaboration with Kähler’s ceramic workshop. In the large polychrome work, the color and the fabric are united, the geometric architecture is transformed and connected with organic shapes in a subdued color scale, where white and blue and the tones in between dominate. Since then, he made several large decorations in this material, most recently Early Bird, inspired i.a. of the telesatellite of the same name. The two large bird-like reliefs are kept in the clay’s reddish-brown colors, added with gray-white and blue. Also in his smaller stoneware sculptures, S. often plays on the contrast between a sandy, rough surface and the smooth, colored glaze. At the same time, he gradually sought to open up the forms so that one could see what they contained. The form of expression is still nonfigurative, an organic, expressionist idiom, inspired by the forms of nature, most often fragments of the human body. In recent years, S. dealt more or less abstractly with the torso as a means of expression, while at the same time working with collagen. Persian faience, of which he, together with African sculptures, built a large collection, was one of his greatest sources of inspiration.