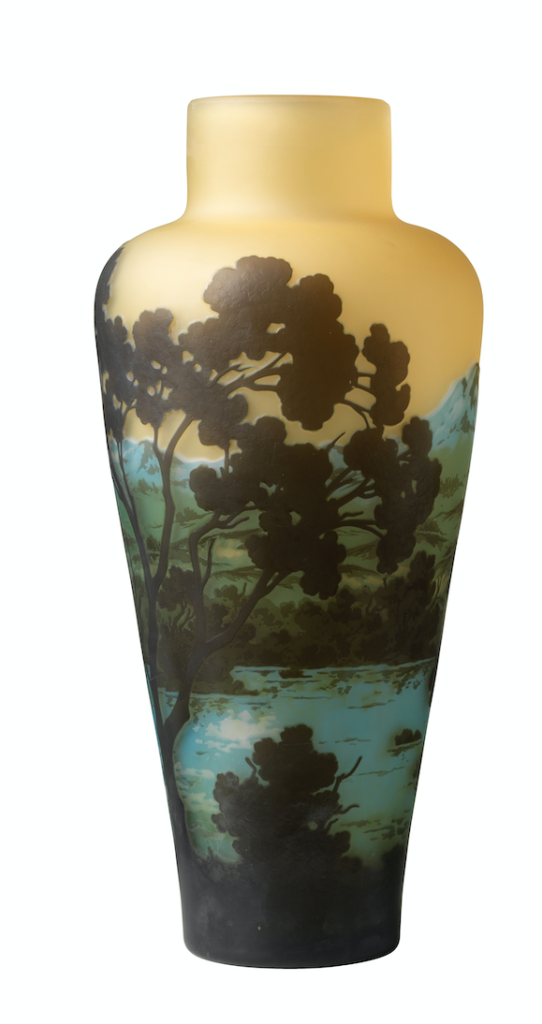 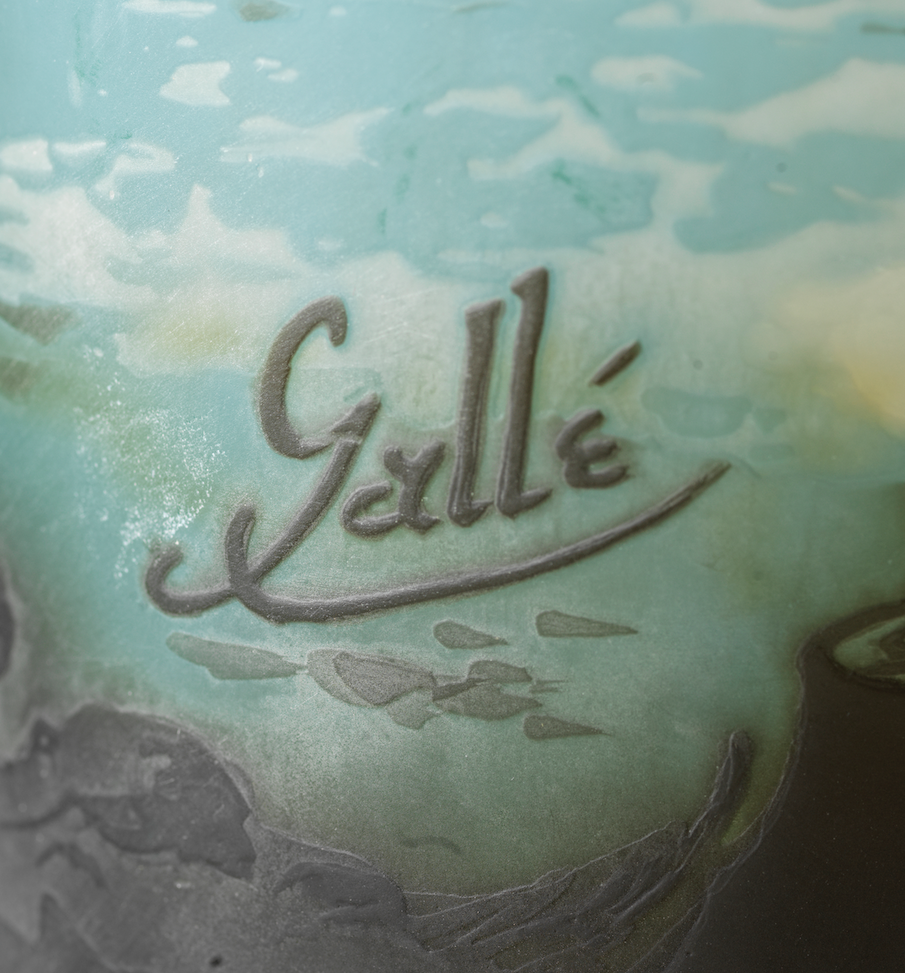 Emile Galle was born in France in 1846 and his training included art, botany, and chemistry, three subjects which he combined in his brilliant designs for glass and other mediums (pottery, furniture, jewelry). His father, Charles Galle, owned a glass and ceramics factory in Nancy. After much travelling and training, fighting in the war between France and Prussia, working for the glass company “Burgun, Schverer et Cie” in Meisenthal, Galle settled back in Nancy and set up his own glass studio in 1873 where he initially made classical forms of glass with classical, intricate, enamelled designs.

Moving on from these designs to botanical themes, again in enamelled glass, it was not until the 1878 International Exhibition in Paris, when Galle saw the work of his contemporaries such as John Northwood and Joseph Locke from England (cameo glass) and Eugene Rousseau (pate de verre) that he developed new and adventurous designs for his glass. Eleven years later at the Paris International Exhibition (1889) Galle exhibited his own new types of glass, including carved cameo work and many new colours. His achievements earned him recognition in the French Legion of Honour.

Even in those early years, Galle made two distinct qualities of glass. On the one hand his “poems in glass”, masterpieces that took hours and hours of patient work to make. And on the other hand, his high quality art glass designed to be less expensive to make but still an object of beauty, good enough to carry his signature. This was later to develop into what is today called “industrial Galle”.

In 1894 Galle built a massive new glassworks in Nancy, and ended his dependence on the Burgun, Schverer glassworks for producing some of his glass. He employed a team of craftsmen-designers, who worked to the edict that all Galle designs should be true to nature. Galle himself modified and approved these designs before they were made by teams of craftsmen in his Cristallerie D’Emile Galle.

Throughout the 1890’s Galle won awards at international exhibitions and recognition through commissions and popular demand for his work. His techniques and style were copied by many other glassmakers who advertised their glass as “Galle style”. He was a major influence on the Art Nouveau movement.

Galle died in 1904, whilst directing the work on new designs from his bed. After his death Mme Galle, his widow, continued to run the glassworks and to make Galle glass until the outbreak of war in 1914, marking all the glass sold by the works after his death with a star after the name Galle.

Emile Galle’s son in law, Paul Perdrizet, re-opened the Galle glassworks after the war. With new workers and new designs, they focussed on two and three layer cameo glass with landscape and floral designs, made by acid-etching. These were popular for some years, but the company did not keep pace with the changes in style in the late twenties, and closed in 1936.