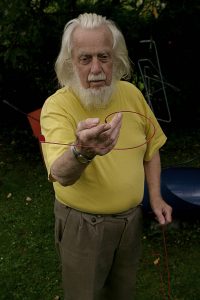 Ib Geertsen was born in 1919 and painted for over 70 years until his death in 2009. In the last four decades of his life his work expanded to include mobile sculptures, screenprints, furniture and public design projects. Throughout his career, Geertsen pursued his very personal vision of ‘Konkrete’ – or geometrical – abstraction with his own distinct exploration of shapes and colour combinations.

Geertsen lived and worked in Copenhagen. He originally trained as a gardener and was self-taught as an artist. Between 1943 and his death he exhibited in every major museum in Denmark and in 2003 he had a retrospective at the Kunsthallen Nicolaj, Copenhagen which led to renewed critical attention. His work can be found in numerous permanent collections including Statens Museum for Kunst, Copenhagen; ARoS, Aarhus Kunstmuseum; and Trapholt Museum, Kolding.