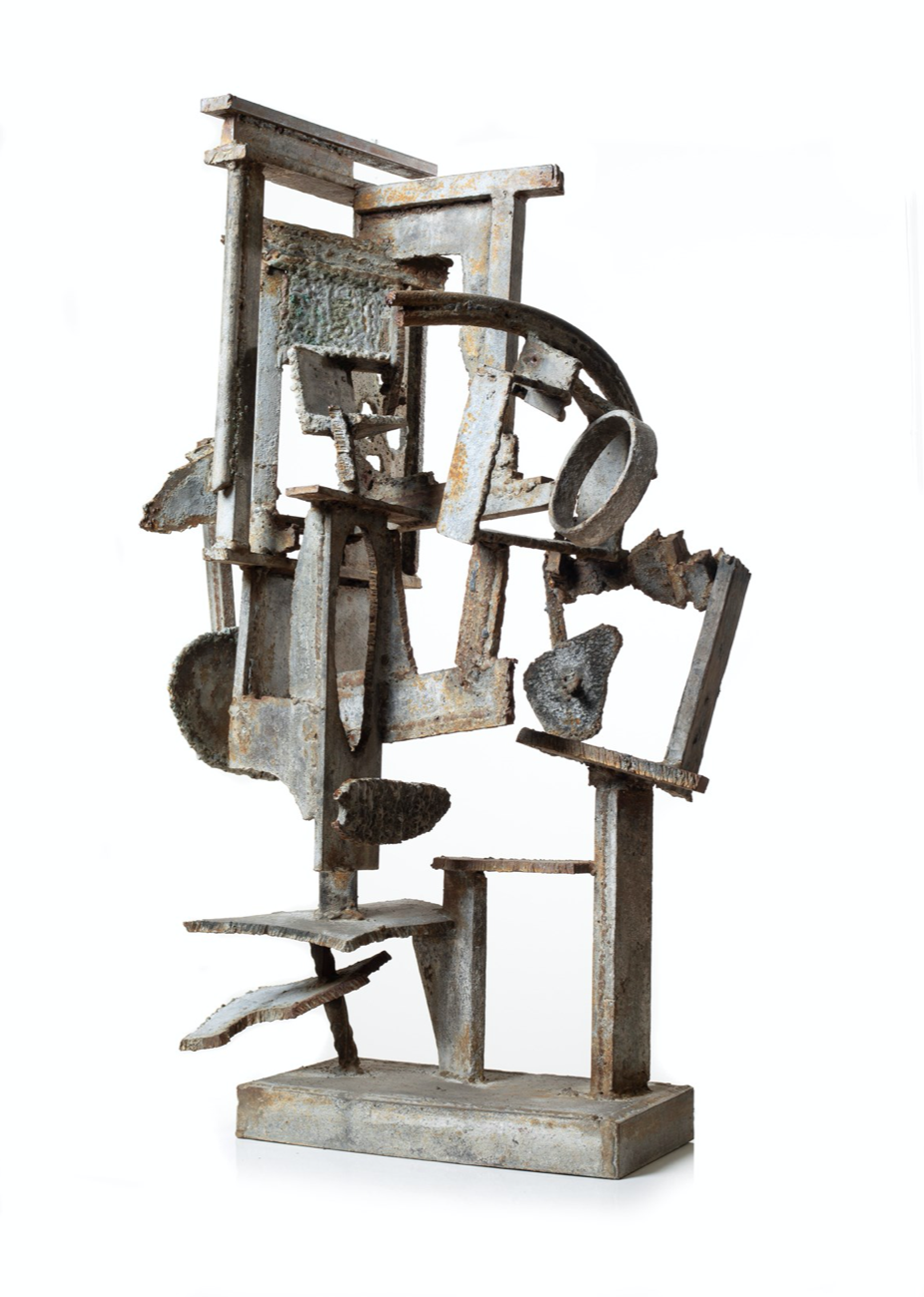 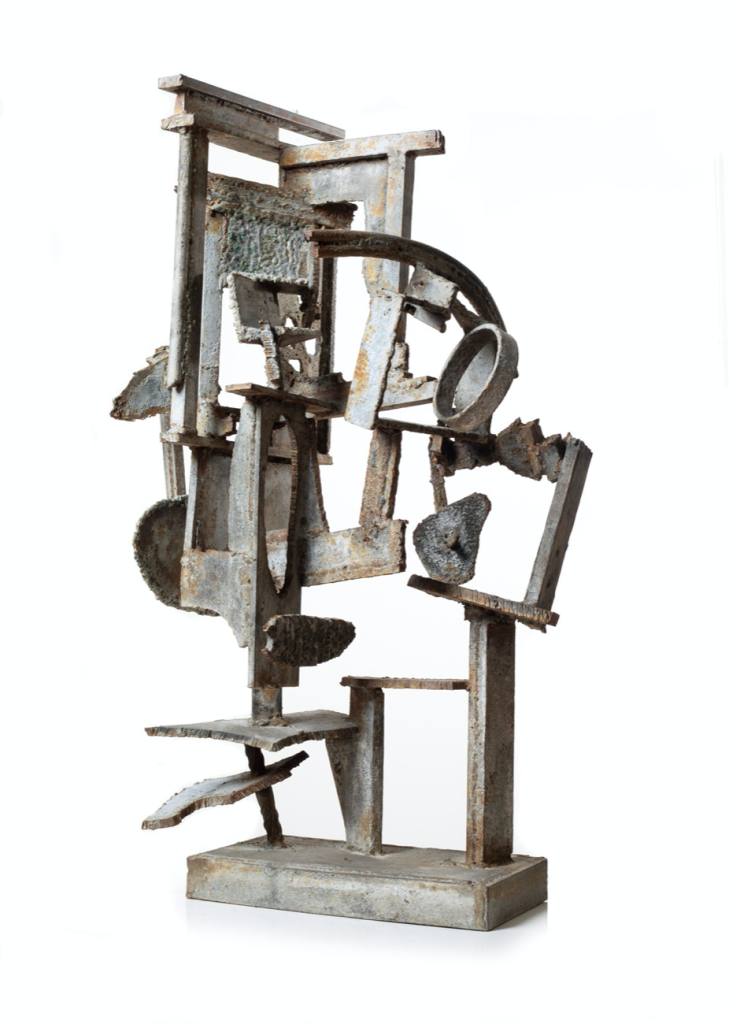 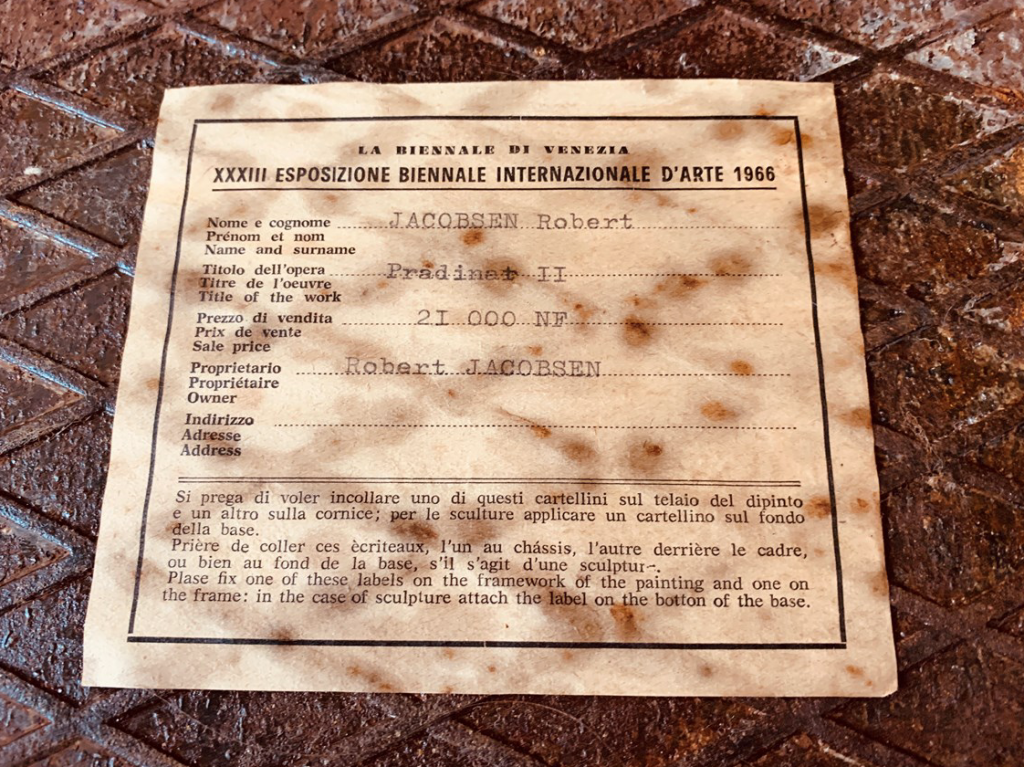 Robert Jacobsen (1912-1993), Danish sculptor. Robert Jacobsen was self-taught and started making sculptures in wood approx. 1930. Later followed imaginative fabled animals, carved in stone, and in 1942 he made his debut at the Artists’ Autumn Exhibition. He exhibited with the association Høstudstilling 1945-46 and also participated in several experimental films, including Jørgen Roos’ Flugten (1942).

Together with the painter Richard Mortensen, Jacobsen traveled to Paris in 1947 and settled in Suresnes. Both artists were associated with the newly opened Galerie Denise René and the group of artists who exhibited here, and Jacobsen was nicknamed le grande Robert. After taking full advantage of the stone’s possibilities, he now began to work constructively with welded iron elements, where he became interested in the relationship between form and space, the positive and the negative, the passive and the active.

During a period of 1949-50, he painted the iron matte black, so that it lost its texture and gained an anonymous character. However, a sculpture like The Borders of the Air (1949) was painted red and blue by the French artist Jean Dewasne, an example of the collective works that several of the constructive / concrete artists performed at this time. Robert Jacobsen participated i.a. in the association Linien II’s exhibitions 1947-48 and in 1951 was one of the initiators of the exhibition Klar Form.

After this period’s rigorous sculptures, he let his imagination run free in the so-called dolls, small human-like figures of scrap and discarded metal elements, inspired by i.a. African art, of which he was a passionate collector. But Jacobsen quickly returned to the constructive idiom. The sculptures from the 1950s are characterized by a raw, irregular surface, where he has not tried to hide the iron, but lets the different shades of rust emerge.

In the 1960s, a new series of characters appeared, which he called Characters, and which, contrary to the puppets’ humor, shows more serious and also aggressive features. Throughout his life, however, he moved between the two opposite poles, the strictly constructive and the organic, between pure forms and imaginative figures. Thus he made a series of gilded scrap reliefs for the exhibition “Robert and Rosenborg” at Rosenborg Castle in 1987.

Robert Jacobsen lived in France until 1969, but also exhibited in Denmark, i.a. with Den Frie Udstilling 1960-68, later with Grønningen (1977-84). In recent years he often worked with sculptures on a very large scale, several of which have been used as monumental decorations. Already in 1962 he made the large sculpture in front of Esbjerg Art Pavilion, later followed i.a. fountain sculptures for Gladsaxe Town Hall (1979), The Mighty Friendship (1986, Tianjin, China, later resold to Sammlung Würth, Künzelsau in Germany, which owns a large collection of Robert Jacobsen’s sculptures) and The Seven Axes to Axeltorv in Copenhagen (1987).

Among his last tasks was a decoration of the choir wall in Hjerting Church north of Esbjerg with 17 gilded metal figures (1992).

In Denmark, Jacobsen settled in Tågelund near Egtved. Together with the French artist Jean Clareboudt (1944-97), he made a series of monumental sculptures in various materials in Tørskind Gravel Grave near Egtved, which are part of a dialogue with the landscape; the sculpture park was inaugurated in 1991.

Alongside the sculptures, Robert Jacobsen has done many graphic works, in recent years also painted glass. He received several awards, including the International Sculpture Prize at the Venice Biennale in 1966, the Thorvaldsen Medal in 1967, the Prince Eugene Medal in 1974 and the Ordre des arts et des lettres in 1987.