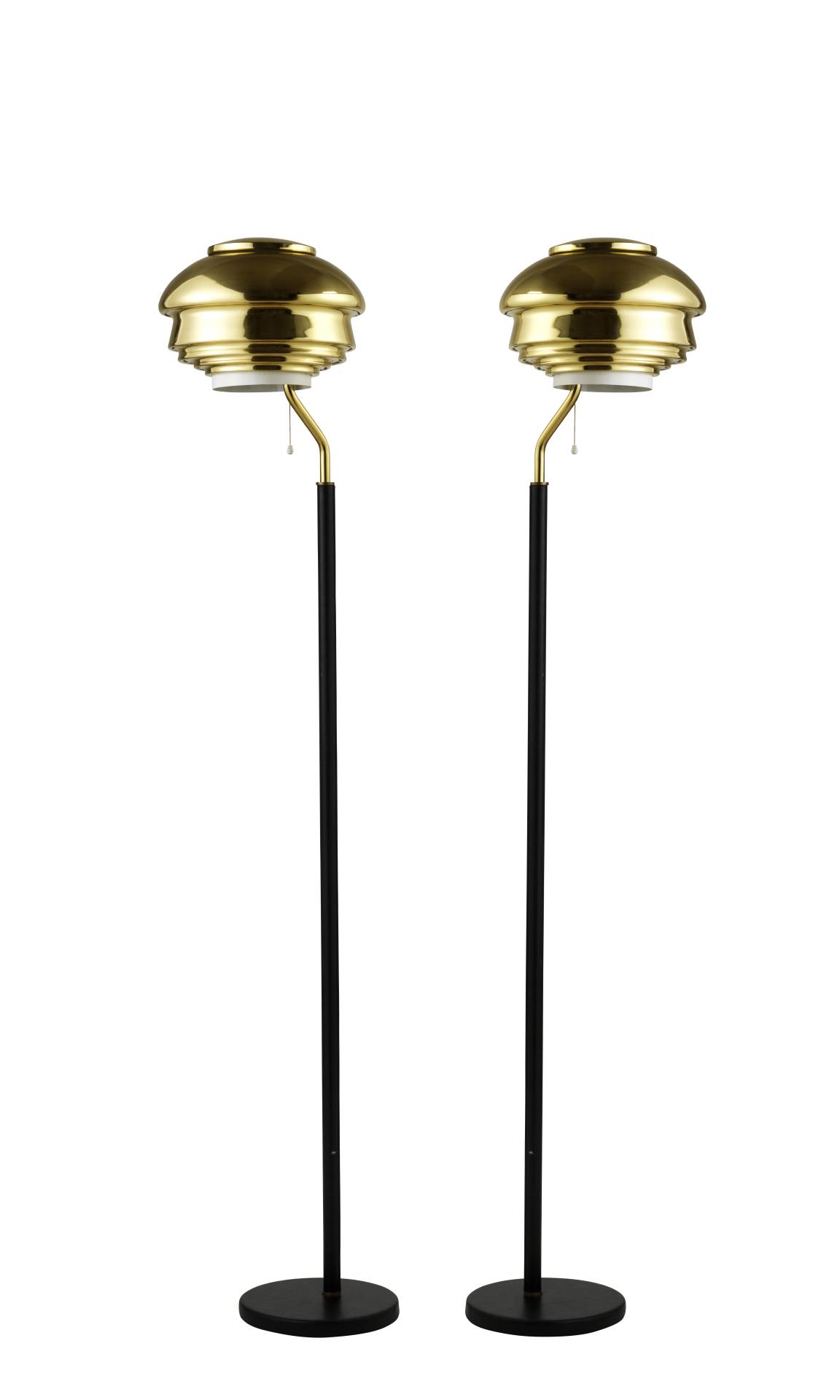 A pair of brass and leather-wrapped metal standard lamps, model A808 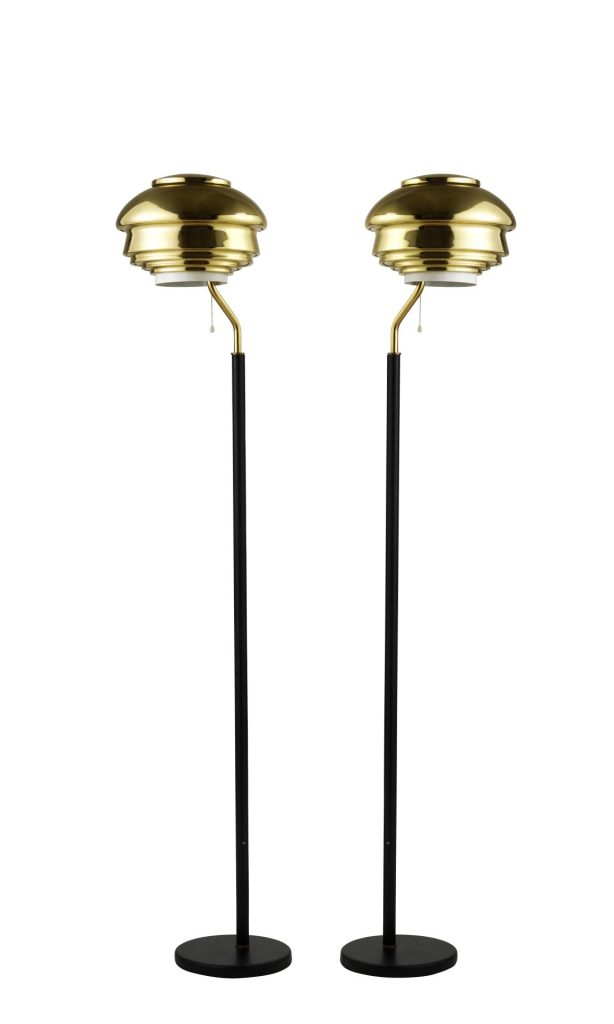 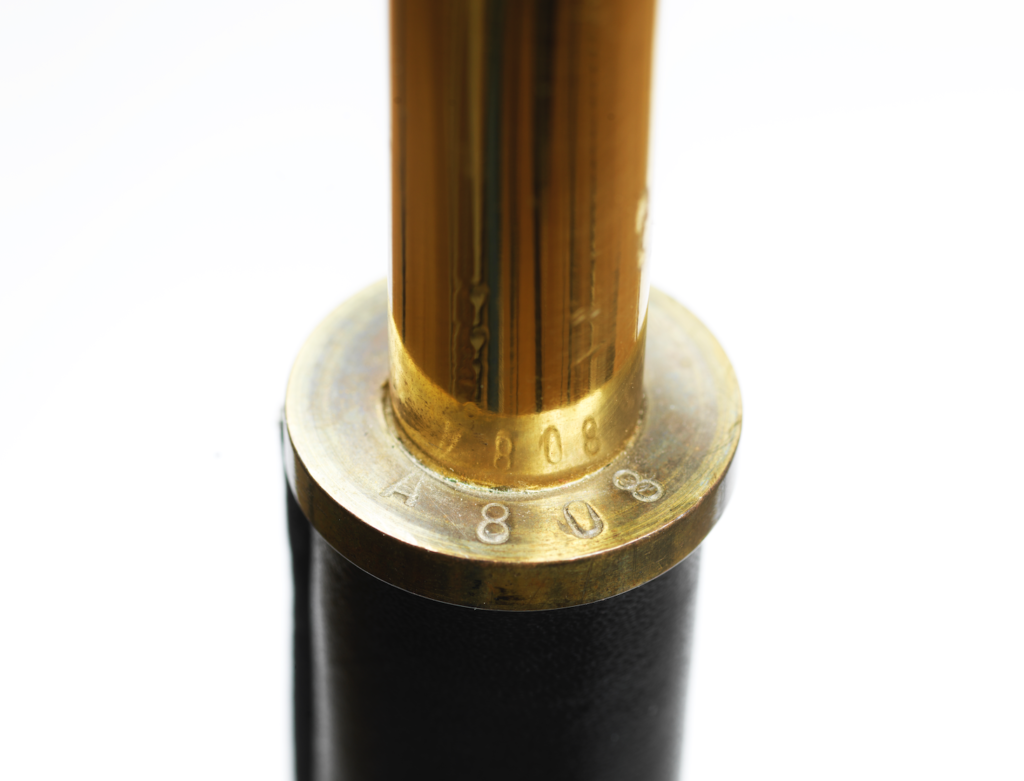 Hugo Alvar Henrik Aalto (1898–1976) was a Finnish architect and designer. His work includes architecture, furniture, textiles and glassware, as well as sculptures and paintings. He never regarded himself as an artist, seeing painting and sculpture as “branches of the tree whose trunk is architecture”. Aalto’s early career ran in parallel with the rapid economic growth and industrialization of Finland during the first half of the 20th century. Many of his clients were industrialists, among them the Ahlström-Gullichsen family. The span of his career, from the 1920s to the 1970s, is reflected in the styles of his work, ranging from Nordic Classicism of the early work, to a rational International Style Modernism during the 1930s to a more organic modernist style from the 1940s onwards.

Typical for his entire career is a concern for design as a Gesamtkunstwerk, a total work of art, in which he – together with his first wife Aino Aalto – would design the building, and give special treatment to the interior surfaces, furniture, lamps and glassware. His furniture designs are considered Scandinavian Modern, in the sense of a concern for materials, especially wood, and simplification but also technical experimentation, which led him to receiving patents for various manufacturing processes, such as bent wood. As a designer he is celebrated as the inventor of bent plywood furniture. The Alvar Aalto Museum, designed by Aalto himself, is located in what is regarded as his home city Jyväskylä.

Whereas Aalto was famous for his architecture, his furniture designs were well thought of and are still popular today. He studied Josef Hoffmann and the Wiener Werkstätte, and for a period of time, worked under Eliel Saarinen. He also gained inspiration from Gebrüder Thonet. During the late 1920s and 1930s he, working closely with Aino Aalto, also focusing much of his energy on furniture design, partly due to the decision to design much of the individual furniture pieces and lamps for the Paimio Sanatorium. Of particular significance was the experimentation in bent plywood chairs, most notably the so-called Paimio chair, which had been designed for the sitting tuberculosis patient, and the Model 60 stacking stool. The Aaltos, together with visual arts promoter Maire Gullichsen and art historian Nils-Gustav Hahl founded the Artek company in 1935, ostensibly to sell Aalto products but also other imported products. He became the first furniture designer to use the cantilever principle in chair design using wood