An unique pair of wall lights of patinated brass, each mounted with original 4/3 frosted glass shades, 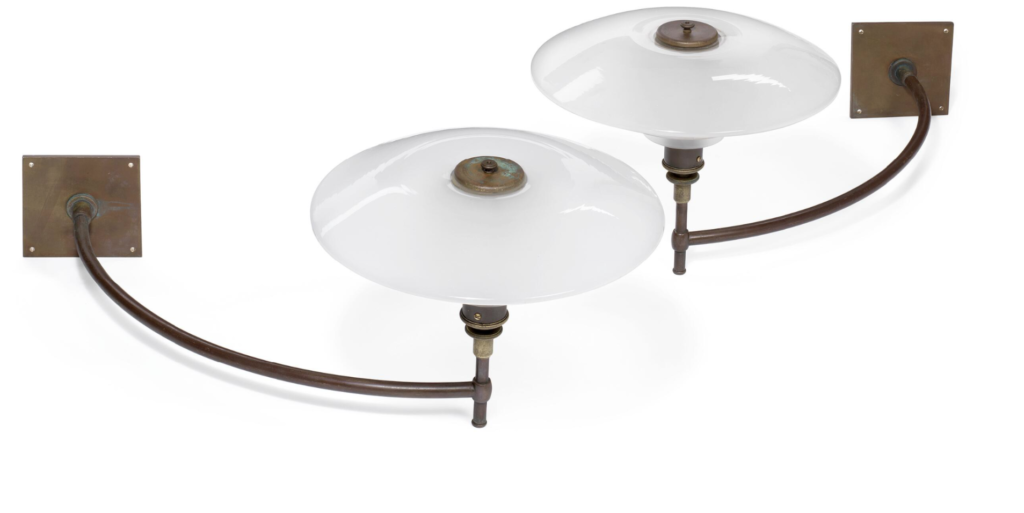 Poul Henningsen was educated as an architect, but it is especially in the field of lighting that his abilities as a designer are seriously known. As early as 1924, Poul Henningsen began his lifelong collaboration with Louis Poulsen, which was to lead to a number of innovative and original lamps.

Poul Henningsen’s background in functionalist architecture was expressed in the desire to create a lamp that would beautify the home both through its form, but also by virtue of the light it emitted. His development of structures, shadows and glare has made him a pioneer in lighting design.

His first year with Louis Poulsen, he developed the first PH lamp, whose unique screen system was awarded the gold medal at the World’s Fair in Paris in 1925, since then the PH lamp’s innovative screen system has also been included in the Danish cultural canon.

Poul Hennigsen combines mathematical precision with organic forms for a timeless, modern design, and the PH lamp and its successor as Koglen og Kuglen have become design icons for the pure sculptural expression, as well as the harmonious, glare-free light it emits.